skip to main | skip to sidebar

An offer they can't refuse 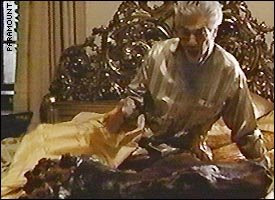 It seems the downturn is not impacting all families with equal misfortune. The mob in Italy is doing quite well, thank you very much. Don't they control NYRA? Can't they increase purses?

Here is a marginally related story.

Maybe Turfway needs some remedial courses in statistical analysis (or at least the reporter does). Citing the number of breakdowns or lack thereof, in a limited time frame, renders any information meaningless. Maybe horses are breaking down because they are cheap and running in frigid conditions? Maybe it has nothing to do with anything.

Turfway saw eight breakdowns on its Polytrack surface during its 21-day holiday meeting, which ended on December 31. But from January 10 to February 10, there was not a breakdown during racing.

What the hell is wrong with people, when they report how this is the first breakdown since the last one? No shit. Statistical outliers are just that. They don't gather into orderly patterns to make a smooth line.

No horse has won the Derby, since Apollo, without having started as a two year old. So what exactly does that tell me? How many horses have tried to win the Derby without having started as a two year old? Out of those, how many had a legitimate shot at winning anything, let alone the Derby? What were the fair odds on all those horses running against all the other horses, in all those years? If a coin comes up heads ten times in a row, it means absolutely Jack Squat when you need to figure the odds on the next flip.

The statistic might have merit but just saying it means nothing. Put the damn thing in context. In the 127 years since Apollo, 500 horses have attempted to win the Kentucky Derby, without having a single start as a two year old. That might mean something. If the number is more like 20, then go spit.
Posted by Wind Gatherer at 13:30

But in totally unrelated news, your companion photo reminded me of a recent link that my husband sent to me, especially if you like pillows:

yes, my friend, they do need some remedial statistics. the general press has been lulled into a sense that it should report statistics of some kind and that simply reporting a number is NEWS.

well, it ain't. Disraeli was right about lies, damned lies, and statistics. without context, baseline pars, and sufficient time and information to evalute them, stats are junk.

in the piece you refer to, Angst brushed the edges of putting the numbers in some level of context regarding the rickety weather we've had in Kentucky this winter, which was probably the culprit at Turfway, rather than some fault in the synthetic track.

Greatest horse ever to look through a bridle

"The thoroughbred exists because its selection has depended, not on experts, technicians, or zoologists but on a piece of wood: the winning post of the Epsom Derby. If you base your criteria on anything else, you will get something else, not the thoroughbred."
-Federico Tesio

Better blogs than this one...